Results of a recent study suggest that children with ASD may have an altered olfactory (sniffing) response. The sniff response is thought to be controlled by “internal action models,” a brain mechanism whereby motor actions are initiated and refined automatically, based on sensory expectations. In the case of olfaction, work with adults has demonstrated that the strength of a sniff is automatically modulated in response to the valence of the odor, with pleasant odors eliciting stronger sniffs and unpleasant odors eliciting weaker sniffs.

The current study measured the sniff response in 18 children with ASD and 18 typically developing (TD) children ranging in age from 4 to 11 years. The authors designed a cannula that delivered a series of pleasant and unpleasant odors directly into the child’s nose and measured the sniff response to each. The procedure took 10 minutes and was conducted while the child watched a cartoon. Results indicated that the TD children, as a group, showed an “adult like” sniff response, whereas the group of children with ASD failed to modulate their sniffs in response to the unpleasant odors. In addition, in the ASD group, longer sniff durations for unpleasant vs. pleasant odors were associated with ASD severity.

The authors propose that this measure of olfactory response may have value in identifying early risk for ASD, in that it is brief and language-free. However, additional research is needed to determine whether this altered olfactory response is specific to ASD and whether the same patterns are found for younger children. 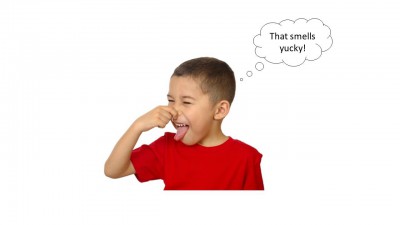